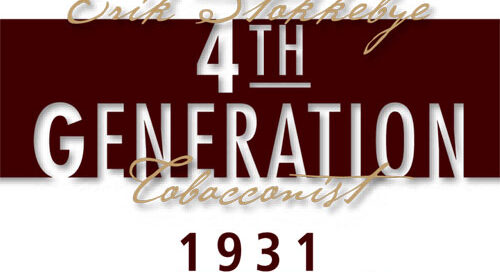 Yesterday at Pipe World we had an event where Erik Stokkebye dropped by and brought pipes and 4th Generation tobacco to sample and purchase.   Upon arrival he was standing behind the counter with a spread of 4-5 of his tobaccos and smiled and welcomed everyone and invited them to fill their pipes with one of his find blends.   We asked about each one and made the rotation through the various ones: 1855, 1882, 1897, 1931, 1957, 1982.

The Stokkebye tobacco tradition began with the birth of Erik Peter in 1855 who went on to found the family business in Denmark. As an homage to his family, Erik Stokkebye developed four blends – 1855, 1897, 1931, and 1957 – marking the years of birth for his great-grandfather, grandfather, father, and himself. Each blend has a unique flavor, is Virginia based, and is reflective of their personal tastes. We hope you will enjoy trying out this special series of tobaccos.

1855 is for Erik Peter his Great Grandfather who started the business.  It’s ready-rubbed Virginia and a non-aromatic.

1882 is called the Founders Blend and is a good English blend with Latakia, Virginia, and Kentucky leaves. Getting a good wiff

1897 is a light aromatic and has Virginias, Burleys, and Cavendish with a top note of vanilla and honey.

1931 is for Erik Peter – his Father and is a Navy Flake which was his favorite tobacco to smoke.  It is pressed Virginia, Burley, and a very small amount of Black Cavendish for balance.  I would also say almost every one of us picked up this tin specifically. Lastly 1982 is celebrating the 100 year anniversary and is a mild aromatic with Virginia, light Burley, and Black Cavendish, with a couple small bits or plugs of navy flake added in – it’s a great balance to throw in the navy flake to this and makes for a long enjoyable smoke. Currently you can grab some at Pipe World, and also note that they are sold out on almost all of these on the usual websites right now.

After Erik talked on his tobaccos we then gathered everyone and he talked on his families business, how they got started, products they offered and how it changed hands.  He talked about how the tobacco was made and manufactured and we all found it very interesting and there were a lot of great questions. The last part of the meeting if you had bought a pipe (which are made for him by Neerup!)or tobacco you received a raffle ticket and Erik raffled off a pipe, a couple hats, and a pipe bag!  I’m glad to say that everyone that won an item was a pipe club member and Raul was the winner for the rusticated pipe!